Documentation for a Jira application

Our partnership with Lios far exceeded our expectations. Pascal and Paige did a top-notch job of adapting to the dynamic and engaging style of documentation that we were looking for. We particularly appreciated the rapport that we built; Pascal and Paige seemed more like colleagues than contractors. We kept in touch day to day on Slack, and the review process that was implemented greatly contributed to the success of the project. We were so confident in them that we expanded their scope to have them review blog posts and marketing materials. I highly recommend Lios and their experts!

With their Checklist for Jira app, Okapya has developed one of the most popular tools on Atlassian Marketplace. As they were preparing to release an all-new version of Checklist, they also wanted to continue to better serve their users by taking the accompanying documentation to the next level. They envisioned creating online documentation that would present information in a user-friendly and balanced way, giving users all the information they needed without getting them bogged down in too much detail. They also wanted to provide various use cases that would showcase all that Checklist for Jira had to offer.

Most importantly, it was vital for Okapya that the documentation be available when the new version of the app was released.

To make all that happen, Okapya would have to overcome some significant hurdles — the first being that their developers already had their hands full developing the new version. And while it may seem counterintuitive, another challenge facing Okapya was that their developers knew their product backwards and forwards, which meant they weren’t in the best position to explain how to use it. By this point, they had become such experts on their product that they had a tough time putting themselves in users’ shoes and determining what information to share, and how.

The Okapya developers also knew that to get the quality of documentation that they wanted for their users, they would have to call in experts. That’s why they decided to approach the Lios team, who already had a proven track record in the industry.

To create documentation that would do the Checklist app justice, Lios started by looking into what documentation worked best for other tools on Marketplace. As a result, they were able to assemble best practices that would guide them throughout the process of developing the documentation.

Alongside the Okapya team, Lios then created the various help pages directly within Confluence, which would give everyone who was involved in the project access at all times, as well as a table to track the progress of each page. That way, Okapya could quickly answer Lios’ questions and leave feedback on each chunk of content as soon as it was ready. This approach established a real dialogue between the teams, which kept things moving quickly. Additionally, the feedback from each side also gave the other side food for thought, which helped make the final documentation more relevant and useful.

Because the two teams had such an open line of communication, Lios was also able to provide feedback on the user interface while testing procedures. Since the technical writing team had the unique position of being both insiders and first-time users, they were able to capitalize on opportunities to make the interface more consistent and intuitive.

For their part, the Okapya team also worked hard to set up an exceptional review process. By reviewing content and comments from a technical and marketing standpoint, Okapya made sure to send Lios a unique message.

By entrusting their documentation to Lios, Okapya was able to meet their goal. They provided their users with top-quality documentation that was ready to go the same day that the new version of the Checklist app was released.

See for yourself what working with experts can do: Checklist for Jira – Server & Data Center Docs

Are you a Jira user like us? Give Checklist for Jira a try!

…and setting new ones

In the end, Lios did much more than just produce documentation for Okapya. They also took the lead on implementing a solid structure and effective tools for updating the Checklist for Jira documentation going forward, which will prove useful as the app evolves and adapts to the various Jira hosting options (Cloud, Data Center, Server). And above all, Okapya can always count on Lios for advice or to review new content to add to the documentation. After all, Lios is just a message away on Slack. 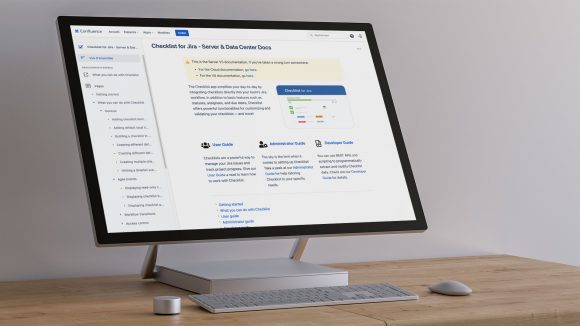 Let's see how we can help you